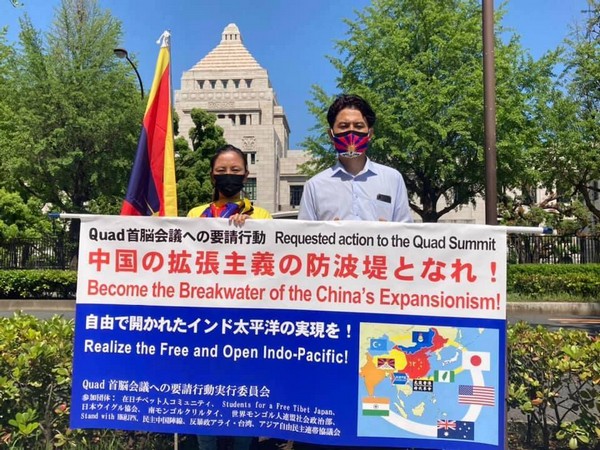 Tokyo: Following the meeting of world leaders in Tokyo at the second in-person Quad Summit, activists including Tibetans, Uyghur Muslims and citizens of Hong Kong gathered outside the Japanese Parliament to put pressure on the leaders of the Quad countries on China issue.
More than 400 activists and protestors fervently urged the leaders of Australia, India, Japan, and the United States to take tough actions against China for its continued violation of human rights of people not just inside various parts of the country but also beyond.
The banners read “Hong Kong Independence” “Revolution”, and “Stop Uyghur Genocide”. The protestors stated that China’s actions were having a long-term detrimental effect on the security of the Indo-Pacific region and if the Quad was interested in pursuing its agenda for a free and open Indo-Pacific, it must take strong steps to counter China.
Stability on the Taiwan Strait was among the regional topics discussed by Biden and Japanese Prime Minister Fumio Kishida during their bilateral talks in Tokyo.
Kishida also discussed the developments with President Biden following which the two leaders shared serious and ongoing concerns regarding developments in Hong Kong and human rights issues in Xinjiang Uyghur Autonomous Region.
Both the top leaders underscored the importance of candid communication with China, including at the leader level and expressed the intent to work with China wherever possible on areas of common interest, a White House statement read.

Get together Slavic Ladies Online