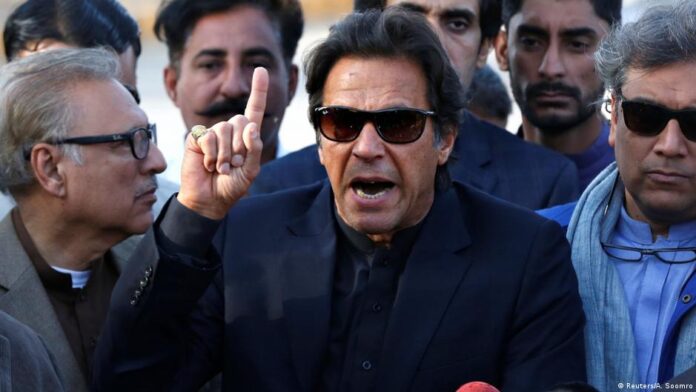 Tensions are building in Pakistan once again with ousted prime minister Imran Khan seemingly on a collision course with the country’s government after he called his followers to defy a ban on a protest march to Islamabad today to demand fresh elections. Visuals Tuesday from the capital city’s Red Zone – home to key government and judicial buildings – showed shipping containers blocking entry and exit and security forces in place. Access to key buildings – parliament, foreign embassies and prime minister’s office – has been restricted.

Pak interior minister Rana Sanaullah has accused Imran Khan of wanting to create ‘chaos’ and has warned the former cricketer he will be stopped. Sanaullah also warned Khan he would be arrested should he persist in holding the march.

Earlier today Khan seemed to fan the flames, not only insisting he would go through with his protest march but declaring himself ‘not afraid of death’.

“I tell my supporters to reach Islamabad and I will also be there… They (the government) don’t have much space in prisons. Get rid of fear…” he said – remarks that seem to set up a hostile stand-off with government forces.

A cricket star-turned-politician, Khan served as prime minister for over three-and-a-half years till he was ousted by a no-confidence vote in April.

He has remained defiant since and has claimed his removal was the result of a United States-organised plot in collusion with his successor, Shahbaz Sharif.

Both the US and the current Pak government have denied the allegation, but that hasn’t silenced Khan.

Two weeks ago Khan also repeated claims of threats against his life. The conspiracy is being hatched in closed rooms inside and outside Pak, he said.

The Stats of Online Meeting up

Where to get a Date