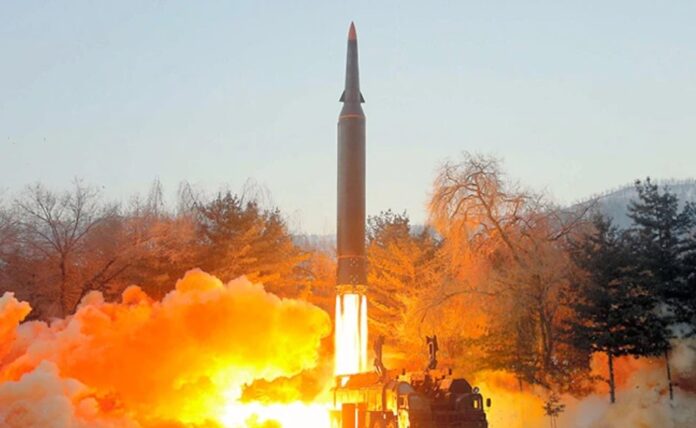 The Defense Ministry’s budget requests for fiscal 2023 will include funds to strengthen Japan’s capability to detect and intercept hypersonic missiles, which are more elusive than conventional missiles, government sources said.

The project will be one of more than 100 items the ministry is expected to pursue without specifying costs.

North Korea earlier this year reportedly conducted tests that included hypersonic missiles, raising a sense of urgency in Japan to bolster defense against such weapons.

Compared with conventional missiles, hypersonic missiles are more dangerous because they can travel at more than five times the speed of sound, or Mach 5, which is about 6,000 kph.

They can also fly at a low altitude, making them less vulnerable to detection by radar and other surveillance systems. They can also travel on irregular trajectories, such ascending and descending, as opposed to the predictable travel paths of ballistic missiles.

North Korea test-fired what it claimed were hypersonic mid-range missiles on Jan. 5 and Jan. 11. The projectiles apparently landed outside Japan’s exclusive economic zone.

The launches raised concerns among Japanese officials because of the difficulties in intercepting hypersonic missiles targeting Japan.

If missiles are fired by a neighboring country toward Japan, the Self-Defense Forces would track them through radar systems placed across the country as well as early-warning aircraft equipped with sophisticated radars until they near Japanese territories.

If the SDF determines that the projectiles would land on Japanese territory, interceptor missiles carried by Aegis system-equipped ships would be deployed to shoot them down outside the Earth’s atmosphere.

If interception fails at this stage, land-based missiles would be launched to intercept the threat near Japan’s ground surface.

To bolster defense against hypersonic missiles, the ministry plans to upgrade the performance of radar site systems and introduce more early-warning aircraft.

The ministry is also trying to enhance the capability of the missile intercept command system known as the Japan Aerospace Defense Ground Environment to efficiently operate the nation’s two-stage missile defense, along with the acquisition of additional missiles, according to the sources.

Hypersonic missiles come in two types: hypersonic cruise missiles (HCM) powered by engines; and hypersonic glide vehicles (HGV), which glide to their targets after being launched from rocket boosters.

Russia and China are ahead of other countries in HGV technology, according to defense experts.

Japan plans to introduce a missile defense system that can deal with HGVs to future Aegis ships, the sources said.

Greatest Places With respect to Couples going in Bulgaria

The Truth About Mail Order Wives

Ideas on how to Meet Women of all ages

How you can Improve Your Marriage – Basic Things You Can...