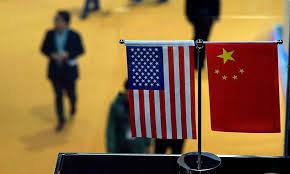 Bachelet had defended her visit earlier on Saturday while still inside China, saying it was “not an investigation” but called on Beijing to avoid “arbitrary and indiscriminate measures” in its crackdown in Xinjiang.

She said the trip was a chance for her to speak with “candour” to Chinese authorities as well as civil society groups and academics.

Her visit was the first to China by a UN high commissioner for human rights in 17 years and comes after painstaking negotiations over the conditions of the visit.

She began her trip on Monday in the southern city of Guangzhou before heading to Xinjiang.

But her access was limited as authorities had arranged for her to travel in a “closed loop” – isolating people within a virtual bubble to prevent the spread of COVID-19 – with no foreign press.

Blinken said the US was also “troubled by reports that residents of Xinjiang were warned not to complain or speak openly about conditions in the region, that no insight was provided into the whereabouts of hundreds of missing Uyghurs and conditions for over a million individuals in detention”.

“The High Commissioner should have been allowed confidential meetings with family members of Uyghur and other ethnic minority diaspora communities in Xinjiang who are not in detention facilities but are forbidden from traveling out of the region.”

Bachelet’s remarks were also swiftly criticised by activists and NGOs, who accused her of providing Beijing with a notable propaganda win.

“Resignation is the only meaningful thing she can do for the Human Rights Council,” said Dilxat Raxit, spokesperson for the World Uyghur Congress advocacy group, while US-based Uighur activist Rayhan Asat called it a “total betrayal” on Twitter.

Her office later clarified that her remarks did not contain a direct endorsement of China’s rights record.

Witnesses and rights groups say more than one million people have been detained in indoctrination camps in the western Chinese region that aim to destroy the Uighurs’ Islamic culture and forcibly integrate them into China’s Han majority.

China initially denied the existence of any detention camps in Xinjiang but in 2018 said it had set up “vocational training centres” necessary to curb what it said was terrorism, separatism and religious radicalism in the region.

Bachelet said she raised with the Chinese government the lack of independent judicial oversight on the operation of the centres and allegations of the use of force, ill-treatment and severe restrictions on religious practice.

In 2019, Xinjiang Governor Shohrat Zakir said all trainees had “graduated”.

Pak and China ‘two brothers’ who nurtured ‘tree of mutual friendship’ over the years,...