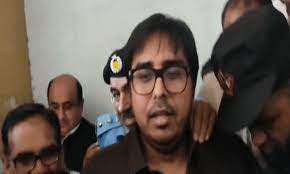 Islamabad [Pakistan], August 24 (ANI): An Islamabad court on Wednesday rejected a request by the capital police for yet another extension of seven days in the physical remand of Pakistan Tehreek-e-Insaf (PTI) leader Shahbaz Gill, who was arrested in a sedition case filed.

The judgment came as the two-day physical remand of the PTI leader which was approved by the court last Wednesday expired, much later than the scheduled date as the court concluded at previous hearings that the remand began late and as such remained incomplete, the Dawn reported.

At the outset of the hearing, Shahbaz Gill was presented before the court amid tight security after the end of his two-day physical remand. The judgment was issued by Judicial Magistrate Malik Aman, who sent Gill on judicial remand.
During the hearing, the PTI leader’s lawyer, Faisal Chaudhry, told the court that he intended to get a power of attorney signed today. The judge, however, remarked that the power of attorney had been signed earlier.
He then asked the lawyer whether Gill had arrived in court. To that, Chaudhry replied in the negative and pointed out that the suspect was yet to reach even when it was past his scheduled time of arrival at 1 pm. He asked the court whether he should start his arguments, the Dawn reported.

The judge, however, pointed out that before the arguments it would have to be seen what was written by the investigating officer in the case file. “The file is not here yet,” he said.
Later, police produced Gill before the court and sought another seven days of his custody.
According to the court order, the completion of every investigation without unnecessary delay was the requirement of every law and the police were bound to submit the investigation report in court.
“If the investigation is not completed in the stipulated period of 14 days from the date of recording of the FIR then the officer-in-charge of the police station, within 3 days of the expiration of the such period, forward to magistrate through the prosecutor an interim report stating therein the investigation till that extent.”

It stated that in Gill’s case, despite the lapse of 15 days, neither the interim nor the complete report was presented by the prosecution.
“Physical remand cannot be granted repeatedly, for the same purpose, without any positive progress,” the court ruled, sending Gill to the judicial lock up. The magistrate instructed the police to produce him before the court on September 7, the Dawn reported.
Speaking to the media after the verdict, Gill’s lawyer, Faisal Chaudhry, said the PTI leader’s legal team was going to immediately file a bail application for his release and that the case against him was based on lies.
He claimed that the remarks attributed to Gill in the first information report were not his comments made on ARY News.
Chaudhry added that he would also challenge in the Supreme Court (SC) the Islamabad High Court’s order that rejected Gill’s plea against his continued remand.
Chaudhry said the government should also get the custodial torture bill approved, which has been pending with a standing committee for the benefit of the common folk and to prevent violence.

‘Hindi, French among most popular languages among Japanese students at Indian-origin schools