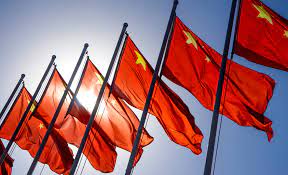 Hong Kong: With no sincerity in its effort to reduce the emission of greenhouse gases, China, which is the biggest emitter of carbon dioxide, has now started deriding the landmark climate legislation of the United States signed into law by President Joe Biden in the third week of August, this year.
Foreign Ministry of China on August 17 said in a sarcastic tweet, “Good to hear. But what matters is: Can the US deliver,” to which the US Ambassador to China Nicholas Burns, responded, “You can bet America will meet our commitments.”

The US envoy also called upon Beijing to resume the suspended climate talks, which China has walked out of; taking the excuse of the visit of Speaker of US House of Representatives Nancy Pelosi to Taiwan, the HK Post reported.
According to a CNN report, China overtook the US in annual emissions in 2006 and has remained the world’s biggest emitter ever since. Carbon emissions by China tripled between 2000 and 2019. Meanwhile, carbon emissions by the US have dropped slightly over the past decade, according to published figures.
Though the US is still the second highest emitter of carbon dioxide, it is way behind China in this dismal record. China, the biggest emitter of carbon dioxide, releases nearly 30 per cent of the carbon dioxide produced in the world by human activities, according to figures that surfaced during the climate summit in Glasgow in 2021; COP26.

In 2019, China emitted 9.9 billion tonnes of carbon dioxide, according to an estimate by the International Energy Agency. The emission by the U.S. that year was 4.7 billion tonnes. According to the Global Carbon Atlas, for 2019, the respective figures for China and the U.S. were 10.5 billion tonnes and 5.2 billion tonnes.
“The People’s Republic of China accounted for almost all of the global increase in electricity and heat sector emissions between 2019 and 2021. A small decline from the rest of the world was insufficient to offset the increase from China,” said Global Energy Review: CO2 emissions in 2021; by IEA.
The success of a global strategy to reduce the emission of greenhouse gases and combat global warming clearly lies in cooperation between China and the USA, the two biggest emitters of carbon dioxide, to arrive at an acceptable strategy, the HK Post reported.

In this background, the move of Beijing to walk out of climate talks with Washington making Taiwan the pretext has been described as “fundamentally irresponsible,” punishing the whole world.
It is going to be a short-sighted move on the part of Beijing to betray its insincerity in arresting global warming as this will finally disillusion the small Pacific Island countries of the Chinese intentions and dissuade them from falling into Beijing’s orbit.
The real intention of Beijing in its foray in the Pacific Island countries is not to save them from the rising ocean level but to wean them away from Taipei and use these islands as bases to interfere with the movement of forces friendly to Taiwan if Beijing finally takes recourse to military force to integrate Taiwan with China.

Dangling the carrot of 2060, in the Paris Agreement China actually obtained the license to pollute the climate freely till 2030. Some experts believe that the Paris Agreement could fail because it allowed China to emit with abundance till 2030.
China has managed to sign a security agreement with Solomon Island and now getting cozy with Kiribati, under the cover of the lullaby of its commitment at the Paris Agreement.
At the same time, China’s emission of carbon dioxide continues to be more than double that of the USA and Beijing is going around setting up coal-fired power stations in poor countries in different corners of the world under its Belt and Road Initiative.

Beijing has taken advantage of the lower demand for coal due to the world progressively reducing its reliance on coal-based energy and actually increasing its reliance on coal. Half of all global coal development and a quarter of all new coal projects throughout the world are financed by China, according to a study by the Asia – Pacific Centre for Security Studies.
With the landmark climate legislation by the Joe Biden government, the USA is now poised to expose the hollowness of China’s promises before the Pacific Island nations. Formally titled ‘Inflation Reduction Act of 2022,’ the Bill which President Joe Biden has already signed into legislation includes about USD 370 billion in clean energy and climate investment over the next 10 years.
“The historic investments included in the Inflation Reduction Act of 2022 will bring down consumer energy costs, and increase American energy security, while substantially reducing greenhouse gas emissions. The combined investments in the FY2022 Budget Reconciliation Bill would put the US on a path to roughly 40 per cent emission reduction by 2030,” said the Democrats in the US Senate.
These investments would also enable America to lessen its reliance on China in clean energy manufacturing, the HK Post reported.
CEO of Nature Conservancy Jennifer Morris has termed the US initiative as “the most significant clean energy and climate legislation in the history of the nation. It will put us on a path to innovate new technologies, leverage the carbon-storing power of nature and incentivize cleaner energy,” calling it a “game-changing moment for people and nature in the United States and beyond.”

Going by the insincere Chinese attitude of making fun of the US initiative, Jennifer hopes that the “legislation also sends a signal to the rest of the world, encouraging other nations to raise their ambition and continue progress toward the shared goal of keeping global warming below 1.5 degrees Celsius” could remain unfulfilled.
Besides clean energy technology, Washington has now taken the initiative to step up its presence in the Pacific Island countries; providing an alternative to the financial resources of China. The USA has begun negotiating deals with the Marshall Islands, Micronesia, and Palau.
US Vice President Kamala Harris on July 12. 2022, announced a series of commitments to strengthen the partnership of the U.S. with Pacific Island countries. Among them were establishing new U.S. embassies in Kiribati and Tonga, trebling the US funding for economic development and ocean resilience, and stepping up the presence of USAID in these countries.
According to a Voice of America report, Beijing is already feeling the pressure of Washington’s geo-political move. Foreign Minister of China Wang Yi said on May 27, 2022, in Kiribati that the United States and its allies were bent on containing China. (ANI)

Pak to receive 20 pc cost of five CPEC projects from...