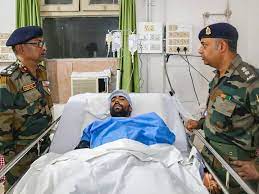 Jammu: A captured terrorist undergoing treatment at a facility of the Indian Army in Kashmir said he had been sent on a suicide mission by a colonel of the Pakistani army. The terrorist, identified as Tabarak Hussain by news agency ANI, said he had come along with four-five other men and had been given ₹30,000 by the Pakistani colonel, Colonel Yunus, to target the Indian Army.
Hussain said he had conducted recce of two or three posts of the Indian Army.
According to inputs shared by the agency, Hussain was captured by the Indian Army on August 21 along the Line of Control (LOC) in the Jhangar sector of Naushera in Jammu & Kashmir’s Rajouri when he and a few other terrorists tried to infiltrate.
“I, along with four-five others had come here on a suicide mission, sent by Colonel Yunus of the Pakistan Army. He gave me ₹30,000 to target the Indian Army. Had recced 1-2 posts of the Indian Army,” Hussain is heard telling a reporter from ANI in a clip shared by the agency.
A spokesperson of the Army said Hussain was in a critical condition after receiving two bullet wounds in his thigh and shoulder. Brigadier Rajeev Nair said Army officials donated blood to the terrorist and he was treated like any other patient whose life had to be saved. “Members of our team gave him three bottles of blood, he was operated on and put in the ICU. He is stable now but will take a few weeks to improve,” Brigadier Nair said.
He also lauded the spirit of the Army officials who donated blood for someone who had come to take their lives, adding the terrorist has the rare blood group O negative.
“We never thought of him as a terrorist. We treated him like any other patient to save his life. It is the greatness of Indian Army officials who gave their blood to him even though he had come to bleed them. His blood group was very rare, O negative,” the brigadier was quoted as saying by news agency ANI.

Ways to Communicate With Latina Brides With respect to Marriage

How to Maintain Successful Intimate Marriages

Apple looking to India, not China, to produce iPhones and more: Report

Finding Foreign Brides to be