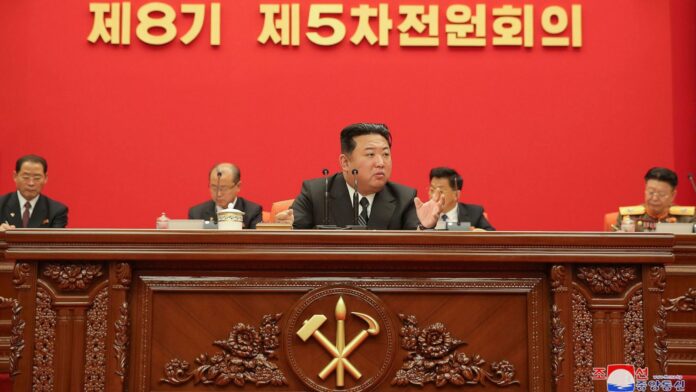 Seoul: North Korean leader Kim Jong Un doubled down on his arms buildup in the face of what he described as an aggravating security environment as he concluded a major political conference that came as US and South Korean officials say North Korea is pressing ahead with preparations for another nuclear test that could be imminent.

Kim’s comments published by North Korea’s state-run Korean Central News Agency on Saturday didn’t include any direct criticism of the United States or rival South Korea amid a prolonged deadlock in nuclear diplomacy during the three days of discussions that wrapped up Friday.

Kim defended his accelerating weapons development as a rightful exercise of sovereign rights to self-defense and set forth further militant tasks to be pursued by his armed forces and military scientists, according to the agency.

But the report didn’t mention any specific goals or plans regarding testing activity, including the detonation of a nuclear device.

(Kim) said the right to self-defense is an issue of defending sovereignty, clarifying once again the party’s invariable fighting principle of power for power and head-on contest, KCNA said.

The meeting came amid a provocative streak in missile demonstrations that jolts an old pattern of brinkmanship aimed at forcing the United States to accept the idea of North Korea as a nuclear power and negotiating economic and security concessions from a position of strength.

North Korea for years has mastered the art of manufacturing diplomatic crises with weapons tests and threats before eventually offering negotiations aimed at extracting concessions.

In a move that may have future foreign policy implications, Kim during the meeting promoted a veteran diplomat with deep experience in handling US affairs as his new foreign minister.

Choe Sun Hui, who is among the North’s most powerful women along with the leader’s sister Kim Yo Jong, had a major role in preparing Kim Jong Un for his meetings with former US President Donald Trump in 2018 and 2019.

Talks between Pyongyang and Washington derailed after the collapse of Kim’s second meeting with Trump in February 2019, when the Americans rejected North Korea’s demands for a major release of US-led sanctions on the North in exchange for limited disarmament steps.

Choe replaces Ri Son Gwon, a hard-liner with a military background who during the meeting was announced as Kim’s new point person on rival South Korea.

North Korea has a history of dialing up pressure on Seoul when it doesn’t get what it wants from Washington. While KCNA’s report on the meeting didn’t include any comments specifically referring to South Korea, it said the participants clarified principles and strategic and tactical orientations to be maintained in the struggle against the enemy and in the field of foreign affairs.

North Korea has already set an annual record in ballistic launches through the first half of 2022, firing 31 missiles over 18 different launch events, including its first demonstrations of intercontinental ballistic missiles in nearly five years.

Kim may up the ante soon as US and South Korean officials say North Korea has all but finished preparations to detonate a nuclear device at its testing ground in the northeastern town of Punggye-ri.

The site had been inactive since hosting the North’s sixth nuclear test in September 2017, when it said it detonated a thermonuclear bomb designed for its ICBMs.

While the United States has said it would push for additional sanctions if North Korea conducts another nuclear test, the divisions between permanent members of the UN Security Council make the prospects for meaningful punitive measures unclear.

Russia and China this year vetoed US-sponsored resolutions that would have increased sanctions, insisting Washington should focus on reviving dialogue.

Kim’s pressure campaign hasn’t been slowed by a COVID-19 outbreak spreading across the largely unvaccinated autocracy of 26 million people.

During the meeting, North Korea maintained a dubious claim that its outbreak was easing, despite outside concerns of huge death rates given the country’s broken health care system.

North Korea has restricted movement of people and supplies between regions, but large groups of workers have continued to gather at farms and industrial sites, being driven to shore up an economy decimated by decades of mismanagement, sanctions and pandemic border closures.

Kim during the meeting said the country’s maximum emergency anti-virus campaign of the past month has strengthened the economic sector’s ability to cope with the virus.

Kim has rejected US and South Korean offers of vaccines and other help. GAVI, the nonprofit that runs the UN-backed COVAX distribution program for vaccines, believes North Korea has begun administering doses given by its ally China. But the number of doses and how they were being distributed wasn’t known.

US-led Indo-Pacific strategy is a ploy to create divisions: China