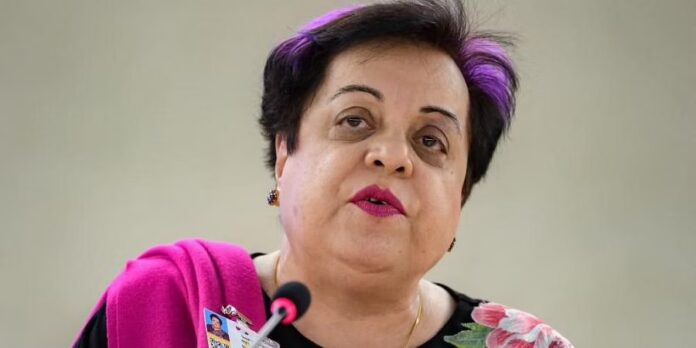 Islamabad/Lahore: Pakistan’s ex-human rights minister Shireen Mazari, who has been criticising the powerful Army after Imran Khan was ousted as prime minister last month, was “beaten” and taken away by the police, her daughter said on Saturday.
Mazari’s arrest by anti-corruption officials triggered a political storm but it was quickly doused with the intervention of Pakistan’s Punjab province Chief Minister Hamza Shehbaz who ordered her release from police custody.
Hamza also ordered an inquiry against those police officials involved in 59-year-old Mazari’s arrest. The chief minister said he had not ordered the Pakistan Tehreek-e-Insaf leader’s arrest, indirectly suggesting “other power establishment figures” behind her detention.
Mazari, a former cabinet colleague of ousted premier Imran Khan, has been criticising the Army after Khan was unceremoniously removed from office through a no-confidence motion last month.
Earlier in the day, her daughter Imaan Zainab Mazari-Hazir tweeted about the arrest by anti-corruption officials. At the time, charges against Mazari were yet to be announced.
“Male police officers have beaten and taken my mother away. All I have been told is that Anti Corruption Wing Lahore has taken her,” Mazari-Hazir wrote.
Officials of the Anti-Corruption Establishment (ACE) confirmed to Dawn News that Shireen had been taken into custody.
According to sources, the police case against Mazari dates back to 1970 when she was seven years old. Her family is accused of grabbing 800 kanals (100 acres) of land in DG Khan district, 400 km from provincial capital Lahore. After decades of judicial delay, a police case in the matter was filed in March this year.
Former special assistant to the prime minister, Shahbaz Gill, asked workers of Tehreek-e-Insaf to reach the Kohsar police station in Islamabad where apparently Mazari was held.
PTI leaders said the arrest smacked of political victimisation. Mazari last week alleged that neutrals were neutral when Khan was removed from office – in what she called an “American conspiracy”.
The word neutral is used for the Army by PTI leaders. Khan, 69, has alleged he was ousted from office by a conspiracy, led by the US, over his pursuance of an independent foreign policy.
Khan’s supporters have used social media to target the Army for doing nothing to save his government. The state institutions like the judiciary and the military have been severely criticised.
Since then, Khan held several public rallies in different cities, labelling the new government as traitors and corrupt rulers allegedly imposed at the behest of the US.
The US has repeatedly denied any involvement in the domestic politics of Pakistan.