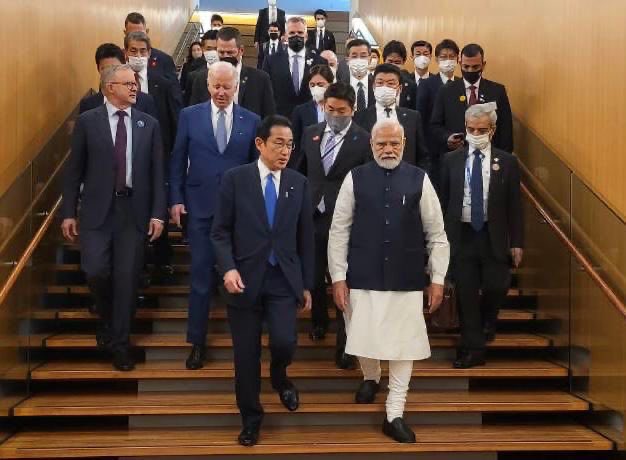 The leaders of the United States, Japan, India and Australia have launched a maritime initiative to combat illegal fishing and pledged to invest more than $50bn in developing infrastructure in the Indo-Pacific as part of their efforts to counter China’s growing influence in the region.

The pledges were announced on Tuesday after the four men met in the Japanese capital, Tokyo, for a second in-person summit of their Indo-Pacific Quad grouping.

The meeting of the informal alliance, which was set up to respond to China’s economic and military might, also discussed climate change, technology and COVID-19, as well as the fallout from Russia’s invasion of Ukraine – an issue that has risked division among the group.

India, which has close ties with Russia, is the only member that is yet to condemn Moscow’s war.

In a joint statement, US President Joe Biden, Japanese Prime Minister Fumio Kishida, Indian Prime Minister Narendra Modi and Australia’s new leader Anthony Albanese said the Quad’s latest measures are aimed at demonstrating that the group “is a force for good” and that it is “committed to bringing tangible benefits to the region” at a time of profound global challenges.

And while the statement did not mention China by name, the leaders said they “strongly oppose any coercive, provocative or unilateral actions that seek to change the status quo” in the Indo-Pacific. These include “the militarization of disputed features, the dangerous use of coast guard vessels and maritime militia, and efforts to disrupt other countries’ offshore resource exploitation activities” – all accusations that have been levied against China.

To address some of these concerns, the Quad said it was announcing a new maritime surveillance initiative – the Indo-Pacific Partnership for Maritime Domain Awareness (IPMDA) – that it said will work with regional partners to respond to humanitarian and natural disasters and combat illegal fishing.

“IPMDA will support and work in consultation with Indo-Pacific nations and regional information fusion centers in the Indian Ocean, Southeast Asia, and the Pacific Islands by providing technology and training to support enhanced, shared maritime domain awareness to promote stability and prosperity in our seas and oceans,” the statement said.

The leaders also committed to deepening cooperation on infrastructure, saying such investment is “critical to driving productivity and prosperity in the Indo-Pacific region”. This includes addressing debt issues and extending more than $50bn in infrastructure assistance and investment in the Indo-Pacific over the next five years. They specifically pledged additional help for island nations in the Pacific, where China’s influence has grown in recent years.

It has previously condemned the Quad as an “Asian NATO” set up to contain its rise.

The Quad leaders also addressed the war in Ukraine, reaffirming their resolve to “uphold the international rules-based order where countries are free from all forms of military, economic and political coercion”. And while their statement did not mention Russia by name, it said the leaders had discussed the “tragic” conflict in Ukraine and underscored the “respect for sovereignty and territorial integrity of all states”.

Biden, meanwhile, in his opening remarks at the summit, said he believed the importance of securing the Quad’s goals – a free, open, connected and secure Indo-Pacific – have only been heightened by the Russia-Ukraine conflict. “We are navigating a dark hour in our shared history,” said the US president. “The Russian brutal and unprovoked war against Ukraine has triggered a humanitarian catastrophe … This is more than just a European issue. It’s a global issue.”

He later addressed the conflict in a bilateral meeting with Modi. A readout of the talks by the White House said Biden “condemned Russia’s unjustifiable war against Ukraine”, adding that the two leaders committed to providing humanitarian assistance and discussed how to manage the disruptions caused by the conflict, including the rise in energy and food prices.

India’s government made no mention of Ukraine or Russia in its readout.

A spokesman for the Indian foreign ministry said Biden and Modi “discussed ways to strengthen cooperation in trade, investment, technology, defence” and that their meeting had “concluded with substantive outcomes adding depth and momentum to the bilateral partnership”.

After the meeting with Modi, Biden also held separate talks with Australia’s new prime minister, who only took up his post on Monday after his party won a general election last weekend. A readout of their meeting from the White House said the two leaders agreed that no event such as the Russia’s invasion of Ukraine must take place in the Indo-Pacific.

Earlier, Albanese had told the Quad summit that while there has been a change of government in Australia, the country’s commitment to the Quad has not changed. He added his priorities aligned with the group’s agenda, and said he looked forward to tackling the “biggest challenges of our time, including climate change and the security of our region”.

The Quad summit took place on the final day of Biden’s five-day trip to Asia, which was aimed at reassuring allies in the region of the US’s continued commitment to countering China, despite its focus on the Russian war in Ukraine.

The Quad is a key component of the US’s “free and open” Indo-Pacific strategy.

First set up in the wake of the Indian Ocean tsunami of 2004 to coordinate humanitarian assistance, the group has now evolved into what the US calls a “leading regional partnership”. Since its revival in 2017, the group has stepped up joint military exercises and after a first in-person summit last year, it also established six leader-level working groups on the COVID-19 pandemic, climate change, technology, cybersecurity, space and infrastructure.

“In a short time, we’ve shown the Quad isn’t just a passing fad,” Biden said at the start of Tuesday’s summit. “We mean business.”

Biden’s Asia tour also included bilateral meetings with Kishida in Tokyo on Monday and with South Korean President Yoon Suk-yeol in Seoul on Saturday. In Tokyo, Biden and Kishida committed to working closely together to address North Korea’s nuclear and ballistic missile programmes and what they called China’s “increasingly coercive behaviour that runs counter to international law”.

The US leader also told reporters that his country would intervene militarily to defend Taiwan in the event of a Chinese attack on the self-governed island. The remarks appeared to signal a shift away from Washington’s decades-long policy of “strategic ambiguity” on Taiwan’s defence. But Biden later told reporters that there is no change in the US approach towards Taiwan.

China, which claims Taiwan as its own, slammed Biden’s comments, saying the US president was “playing with fire”.

Separately, Biden also launched in Tokyo on Monday the Indo-Pacific Economic Framework for Prosperity (IPEF), an economic plan that seeks to set standards on labour, supply chains, clean energy and anti-corruption. The framework, launched in partnership with 12 other countries including India, represents a US attempt to boost economic ties with nations in the Indo Pacific after former US President Donald Trump abruptly withdrew from a multi-national trans-Pacific trade agreement.

In Seoul on Saturday, Biden and Yoon also pledged to consider expanding their joint military drills in the face of North Korea’s growing nuclear and missile programme.

How you can get the most out of Your Marital relationship

Steps to create a Adult toy

The Legal Great things about Marriage