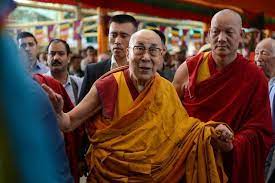 Dharamshala: Tibetan spiritual leader the Dalai Lama has written to Australian Prime Minister-elect Anthony Albanese congratulating him on his party’s victory in the elections there.

“Beginning with my first visit to Australia in 1982, I have had the privilege to visit your beautiful country quite regularly, mostly at the invitation of educational institutions and organisations committed to peace. I have been deeply touched by the openness and warmth of people from all walks of life,” the Dalai Lama said in the letter.

“I have been encouraged by enthusiastic interest many have shown in my efforts to promote basic human values such as kindness, tolerance and forgiveness, as well as inter-religious harmony,” he said.

The Dalai Lama said Tibetans have been honoured to enjoy the support of Australian people and their leaders in their effort to preserve the Buddhist cultural heritage.

“Its principles of non-violence and compassion have the potential to help individuals find peace of mind and contribute to peace in the world,” he said. The Dalai Lama wished Albanese success in challenges in front of him.

How to get a European Girls International Going out with Agency

As US mourns shootings, NRA in turmoil but influence remains

Is Your Long Distance Relationship Moving Too Fast?

How to get a Good Woman to Get married to