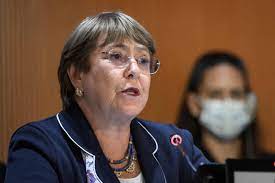 China’s crackdown on Muslim minorities in the remote region of Xinjiang will return to the spotlight next week when Beijing hosts the United Nations human rights chief for the first time in nearly two decades.

The highly scrutinised six-day trip by High Commissioner Michelle Bachelet will begin Monday, with stops in the cities of Urumqi and Kashgar in Xinjiang, as well as Guangzhou in southern China, the UN announced Friday.

Bachelet will meet “a number of high-level officials”, her office said, adding that she would “also meet with civil society organisations, business representatives, academics, and deliver a lecture to students at Guangzhou University”.

But hopes of a thorough investigation into rights abuses have given way to concern among rights advocates that the ruling Communist Party will use the visit to whitewash its alleged atrocities.

China is accused of incarcerating one million Uyghurs and other Muslim minorities in detention camps in the far-western region in a years-long security crackdown that the United States and other countries have called a “genocide”.

Beijing has vociferously denied genocide allegations, calling them the “lie of the century” and arguing that its policies have countered extremism and improved livelihoods.

Bachelet will meet virtually with heads of foreign missions on Monday before visiting Xinjiang on Tuesday and Wednesday, according to diplomatic sources in Beijing.

The visit to China is the first by the UN’s top human rights official since 2005, when Beijing was keen to soften its global image as it prepared to host the 2008 Olympics.

Since 2018, UN officials have been locked in negotiations with the Chinese government to secure “unfettered, meaningful access” to Xinjiang before the trip was announced in March.

Instead, campaigners fear that Bachelet will get a stage-managed tour that sidelines key issues.

With hundreds of thousands in detention and many mosques closed or destroyed, authorities in Xinjiang appear to have pivoted in recent years to focusing on economic development, according to scholars and Uyghurs based outside China.

Rights groups have warned that pervasive state surveillance and fear of retaliation will prevent Uyghurs on the ground from speaking freely to the UN team.

“We fear the visit will be manipulated by the Chinese government to whitewash the severe abuses in Xinjiang,” said Maya Wang, senior China researcher at Human Rights Watch.

Campaigners have questioned why Bachelet — a former president of Chile and a torture survivor — has not been more outspoken about Xinjiang.

The United States warned Friday that Bachelet’s “continued silence in the face of indisputable evidence of atrocities in Xinjiang” was “deeply concerning”.

Her reluctance to criticise may reflect Beijing’s powerful influence at the UN, which puts officials “under a lot of constraints”, Irwin said.

Rights groups have been dismayed by the stalled release of Bachelet’s long-awaited report on Xinjiang, believed to have been completed in September.

A spokeswoman for Bachelet said Tuesday that it would not be released before her trip and there was no clear timing for making it public.

Hundreds of overseas Uyghurs and Kazakhs — another Muslim minority in Xinjiang — have staged rallies in recent weeks to urge Bachelet to visit detained relatives.

Tursan Can Heyit, 31, joined a demonstration in Istanbul after unsuccessfully petitioning Chinese authorities for years for information about his parents and sister, who vanished in 2017 and 2018.

The Uyghur PhD student has since learned that his sister was sent to a “re-education” camp in 2018, but his parents’ whereabouts remain unknown.

“The UN must raise the concerns of relatives of Uyghur concentration camp victims in meetings with high-level Chinese officials,” he told AFP from Istanbul.

“I’ve tried asking through all the available channels, but now I’m increasingly disappointed.”

What is the Best Online dating service?