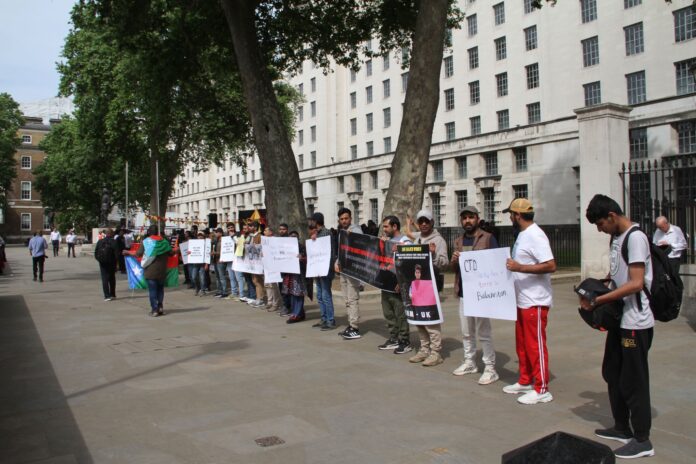 London [UK]: The Baloch National Movement (BNM) has staged a demonstration outside the British Prime Minister’s residence in London.

The purpose of the demonstration that was held on May 18 was to record a protest against the illegal arrest of Noorjan Baloch by Pakistani forces in Hoshaap.

After the arrest, Noorjan was later produced in a court and charged with fake and baseless FIRs and again the forcible disappearances of Baloch students and their racial profiling in different universities of Punjab.

A large number of BNM workers participated in the demonstration and displayed placards about the ongoing human rights violations in Balochistan.

Strongly condemning the extrajudicial arrest of Noorjan Baloch, the speakers said the state of Pakistan is violating all the laws of war in Balochistan. “Which are a humiliation of humanity and a violation of basic human rights and international laws.”

“The state of Pakistan has been arresting and disappearing women in Balochistan for a long time. Today, Baloch women are being tortured along with men in Pakistani torture cells and recently Pakistan intensified this practice,” they said.

Another speaker said that the Pakistani government is humiliating Baloch women by justifying it as retaliation after the actions of Banuk Sharai Baloch and trying its best to threaten all Baloch men and women. “From Zarina Marri to the hundreds of Baloch women who were abducted and forcibly disappeared, were they also abducted in reaction to any action? The answer is no. It’s a state policy to terrorise the Baloch masses.”

The speakers urged the United Nations, EU, International human rights bodies and the international community to take urgent actions against Pakistani atrocities and intervene in Balochistan.

The Pakistan Army is said to be openly involved in killing of Baloch genocide, in contravention of all international human rights laws and principles.

How to Search For an Asian Significant other

Attributes of a Great Girl to Marry

Where to Find Someone to Write Your Essay