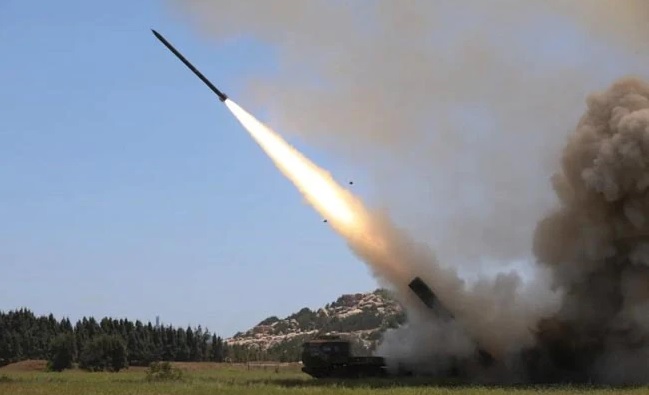 Singapore: China’s recent decision to fire missiles over Taiwan is a “gorilla in the room” that has to be contested, a top US military commander said Tuesday.
Beijing has carried out huge air and sea drills this month around Taiwan in a furious reaction to visits by US House Speaker Nancy Pelosi and a congressional delegation.
Those exercises included firing multiple ballistic missiles into waters off Taiwan — some of the world’s busiest shipping routes — and it was the first time China has taken such a step since the mid-1990s.
“It’s very important that we contest this type of thing. I know that the gorilla in the room is launching missiles over Taiwan,” Seventh Fleet Commander Vice Admiral Karl Thomas told reporters in Singapore.
“If we just allow that to happen, and we don’t contest that, that’ll be the next norm,” he added.
“It’s irresponsible to launch missiles over Taiwan into international waters, where the shipping lanes, where free shipping operates.”
The Seventh Fleet is based in Japan and is a core part of Washington’s navy presence in the Pacific.
During this month’s drills Chinese state media reported that some of the ballistic missiles fired by the People’s Liberation Army followed a trajectory directly over Taiwan’s capital Taipei, a new escalation that Beijing stopped short of confirming.
Thomas compared the threats against Taiwan to the South China Sea where Beijing has spent years constructing military bases and facilities on a series of contested atolls, while denying it was doing just that.
“If you don’t challenge it… all of a sudden it can become just like the islands in the South China Sea (that) have now become military outposts,” he said.
“They now are full functioning military outposts that have missiles on them, large runways, hangers, radars, listening posts.”
China’s Communist Party has never run Taiwan but it regards the island as its territory and has vowed to one day seize it, by force if necessary.
Sabre rattling towards Taiwan has become more pronounced under Chinese President Xi Jinping.

The United States and Western allies have increased “freedom of navigation” crossings by naval vessels of both the Taiwan Strait and South China Sea to reinforce the concept that those seas are international waterways, sparking anger from Beijing.
China said it conducted new military drills on Monday as a delegation of US lawmakers visited Taipei.
State media ran footage and pictures of Taiwan’s Penghu islands purportedly taken from Chinese jets flying a short distance from the archipelago.
But Taiwan denied that Chinese jets came close to Penghu.
“The CCP used cognitive warfare and other tricks to exaggerate and show that (its jet) was close to Penghu. This is not true,” senior air force official Tung Pei-Lun told reporters on Tuesday.
The Penghu islands sit in between the Chinese mainland and Taiwan.
They host a major Taiwanese airbase and would be on the front line of any invasion attempt by Beijing.
With China pressing on with its drills, Taiwan’s army said it would stage an armed F-16 exercise on Wednesday evening in the coastal city of Hualien, in a rare display of its advanced military capabilities.
In another move to rachet up economic pressure on Taiwan, Beijing on Tuesday sanctioned seven senior Taiwanese officials for being “diehard ‘independence’ separatists”, the official Xinhua news agency said.
The sanctions, mostly against figures from President Tsai Ing-wen’s ruling Democratic Progressive Party, were imposed because their activities “became all the more egregious” during Pelosi’s visit, Xinhua said.
The sanctioned people are banned from entering China including Hong Kong and Macau, and are blocked from conducting any business with mainland entities.
Taipei said China was “trying to cause a chilling effect” through the sanctions, which included the island’s de-facto envoy to the United States Hsiao Bi-khim.
An opinion poll published Tuesday showed that most of the Taiwanese public remain uncowed by the drills.
According to the Taiwanese Public Opinion Foundation, 45 percent of respondents said they are not afraid at all and 33 percent said they are not very afraid of the drills. Five percent said they were very afraid.

‘I was hit by four bullets,’ says Imran Khan in first address to nation after assassination bid

India will never accept any attempt to unilaterally change status quo along its borders,...

As US mourns shootings, NRA in turmoil but influence remains

The best places to Meet the Correct Japanese Person