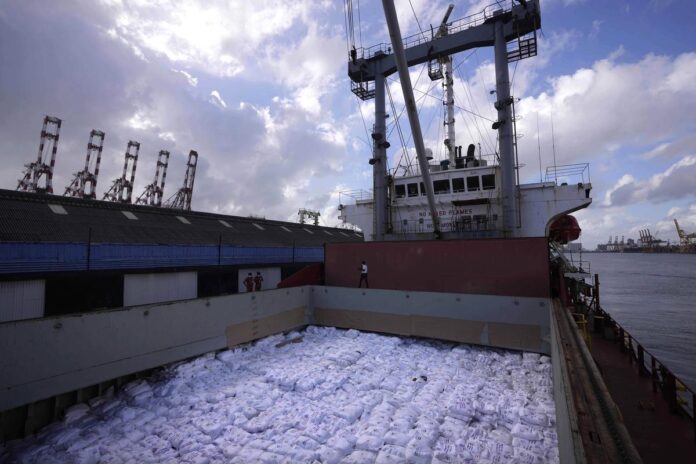 An Indian ship carrying urgent relief supplies like rice, life-saving medicines and milk powder for the people of crisis-hit Sri Lanka arrived in Colombo on Sunday and the consignment was handed over to the government in the island nation.

Indian High Commissioner Gopal Baglay handed over to Lankan Foreign Minister G.L. Peiris the consignment which consists of 9,000 metric tonne (MT) of rice, 50 MT of milk powder and more than 25 MT of drugs and other medical supplies.

“Sri Lanka today received ₹2 Billion worth Humanitarian aid including milk powder, rice and medicines from India. Our sincere gratitude to the Tamil Nadu Chief Minister Hon. @mkstalin and the People of India for the support extended. I also appreciate the assistance given by the @IndiainSL and CWC Leader @S_Thondaman in Sri Lanka,” Prime Minister Ranil Wickremesinghe tweeted.

This is also the first consignment under a larger $16 million commitment of 40,000 MT of rice, 500 MT of milk powder and medicines by Government of Tamil Nadu, an official release said.

Speaking at the ceremony here attended by several Lankan ministers, Foreign Minister Peiris said “India has not sent any assistance anywhere of this scale ever before”.

“They are to assist us more for which we would be grateful,” Mr. Peiris said, adding that India had so far extended assistance worth $4.5 billion.

Tamil Nadu Chief Minister M.K. Stalin had flagged off the ship laden with relief supplies, the first to be dispatched to Sri Lanka, from Chennai on Wednesday.

The items shall be distributed among vulnerable and needy sections in various parts of Sri Lanka including Northern, Eastern, Central and Western Provinces by Government of Sri Lanka in the coming days.

“More humanitarian consignments and other forms of assistance from India shall follow. Multi-pronged endeavour by both the Government and people of India underlines the importance attached to Sri Lanka and reflects their concerns for the well-being of its people,” said the release.

Support extended to Sri Lanka ranges from economic assistance worth around $3.5 billion, supply of vaccines, testing kits, close to 1000 MT of liquid oxygen to combat COVID-19, immediate response by the Indian Navy and Coast Guard to mitigate marine disasters etc, it added.

Sri Lanka is going through the worst economic crisis since independence in 1948. A crippling shortage of foreign reserves has led to long queues for fuel, cooking gas and other essentials while power cuts and soaring food prices heaped misery on the people.

The economic crisis has also triggered a political crisis in Sri Lanka and a demand for the resignation of the powerful Rajapaksas.

India has said that as an eternal and reliable friend of Sri Lanka, New Delhi is fully supportive of the island nation’s democracy, stability and economic recovery.

In keeping with India’s Neighbourhood First policy, New Delhi has extended this year alone support worth over $3.5 billion to the people of Sri Lanka for helping them overcome their current difficulties, the Ministry of External Affairs said on May 10.

India on Saturday provided another 40,000 metric tonnes of diesel to Sri Lanka under the credit line facility to the island nation which is grappling with its worst economic crisis.

Last month, India extended an additional $500 million credit line to help Sri Lanka import fuel as the country has been struggling to pay for imports after its foreign exchange reserves plummeted sharply in recent times, causing a devaluation of its currency and spiralling inflation.

Several private and social organisations from India have sent assistance to Sri Lanka to meet various urgent requirements. This outpouring of support for Sri Lanka among common Indians is apart from the economic assistance by Government of India which has been to the tune of around $3.5 billion since January this year. In addition, medicines, dry rations etc have also been sent by Government of India on grant basis, the statement said.