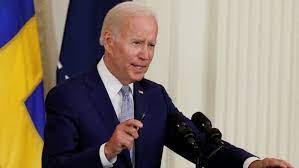 The United States has announced nearly $3bn in new military aid to Ukraine, with President Joe Biden saying the assistance aims to help the country defend against Russia’s invasion “over the long term” as the war entered its seventh month.

In a statement on Wednesday, as Ukraine marked its independence from the Soviet Union, Biden said the $2.98bn package would allow Kyiv to acquire air defence systems, “artillery systems and munitions, counter-unmanned aerial systems, and radars”.
This is the single largest US aid package for Ukraine since Russian forces began their full-scale military invasion of the country in February.

“I know this independence day is bittersweet for many Ukrainians as thousands have been killed or wounded, millions have been displaced from their homes, and so many others have fallen victim to Russian atrocities and attacks,” Biden said in the statement.

“But six months of relentless attacks have only strengthened Ukrainians’ pride in themselves, in their country, and in their thirty-one years of independence.”
Al Jazeera’s Kimberly Halkett, reporting from the White House, said the package marked “a real shift in posture” because the support will be used for “buying and purchasing [military equipment] for the long term”.
“Initially, what US security assistance [for Ukraine] was focused on was immediate needs. In other words, the Pentagon supplied what it had in stock, and shifted it over as quickly as possible,” Halkett said.

“But now, what this is going to be is the utilising of [US] Department of Defense contracts to purchase for the long term.”

Wednesday’s announcement comes just days after Washington announced an additional $775m in military aid to Kyiv, with US Secretary of State Antony Blinken saying on Friday that the Biden administration was committed to helping Ukraine “for as long as it takes”.

A senior US defence official told reporters that the package will include surveillance drones, anti-tank missiles, as well as for the first time, mine-resistant vehicles.

The conflict in Ukraine has “entered a war of attrition”, Melinda Haring, deputy director of the Atlantic Council’s Eurasia Center, told Al Jazeera on the completion of six months of the Russian invasion, with much of the focus now on the country’s south and the fate of the Zaporizhzhia Nuclear Power Plant.
“If the West continues to provide Ukraine with the weapons that it needs, if the strong coalition in the West holds throughout the winter and the Germans don’t cave, and if the EU finally delivers on the promised budgetary support to maintain Ukraine’s schools, hospitals and state services, Ukraine’s got a real shot at an eventual victory,” Haring said.

For months, Russia has warned the US and European nations against providing heavy weaponry to Ukraine. But Ukrainian President Volodymyr Zelenskyy and other government officials have urged their allies to send more assistance to help the country stave off Russian forces.

In total, the US has committed approximately $10.6bn in security assistance to Ukraine since the beginning of the Biden administration in January 2021, the Reuters news agency reported.

The Qualities of a Great Wife

The Reputation of Japanese Women

Tips on how to Kiss Your lover – Getting Techniques