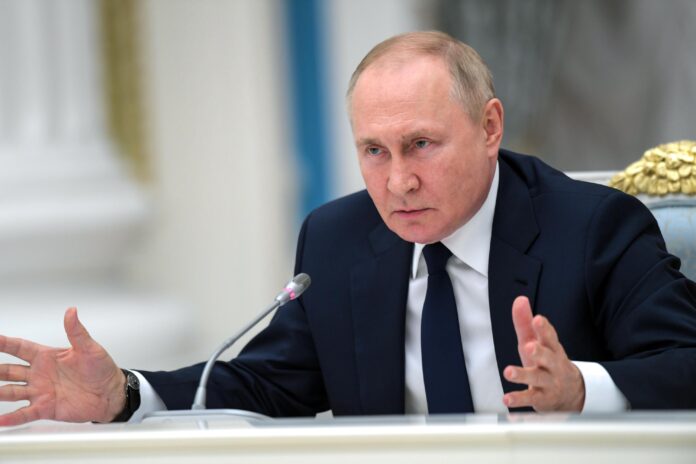 That, say two Russian sources familiar with Kremlin thinking, is the only path to peace that Moscow sees, given Kyiv says it will not negotiate until Russia leaves all of Ukraine.

“We have time, we can wait,” said one source close to the Russian authorities, who declined to be named because they are not authorised to speak to the media.

“It’s going to be a difficult winter for Europeans. We could see protests, unrest. Some European leaders might think twice about continuing to support Ukraine and think it’s time for a deal.”

A second source close to the Kremlin said Moscow thought it could already detect faltering European unity and expected that process to accelerate amid winter hardship.

“It will be really tough if it (the war) drags into the autumn and winter. So there’s hope they (the Ukrainians) will ask for peace,” said the source.

There was no immediate response from the Kremlin, which denies Russia uses energy as a political weapon, to a request for comment.

Ukraine and its staunchest Western backers say they have no plans to fold and U.S. officials, speaking on condition of anonymity, say they so far see no signs of support for Ukraine wavering.

European Commission President Ursula von der Leyen, in a tweet to Ukrainians on their national day, said: “The EU has been with you in this fight from the very beginning. And we will be for as long as it takes.”

Backed by billions in U.S. and other Western military aid, training and shared intelligence, and with a series of morale-boosting attacks on high-profile Russian targets behind it, Kyiv thinks it has a chance of changing the facts on the ground.

“In order for negotiations with Russia to become possible, it is necessary to change the status quo at the front in favour of the Armed Forces of Ukraine,” Mykhailo Podolyak, a Ukrainian presidential adviser, told Reuters.

“It is necessary that the Russian army suffer significant tactical defeats.”

Ukrainian forces thwarted Russian attempts to capture the capital Kyiv and the second city Kharkiv; have regularly destroyed and disrupted Russian supply lines, and sank the Moskva, the flagship of Russia’s Black Sea Fleet, as well as inflicting major damage on a Russian air base in annexed Crimea.
Kyiv has also long been talking about a major counter-offensive to retake the south, though Russia has been busy building up its own forces there, and it’s unclear if and when that will materialise.

TEST OF WILL
The geopolitical standoff has sent energy prices to record highs. The European Union banned Russian coal and approved a partial ban on Russian crude oil imports to punish Moscow for the “special military operation” it launched exactly six months ago on Feb. 24.
And Russia struck its own blow, sharply cutting gas exports to Europe.

European governments have sought to increase resilience to energy pressures this winter by seeking alternative supplies and pushing through energy saving measures, but few energy specialists believe they will be able to cover all their needs.

The Kremlin has blamed reduced gas flows on technical issues, Western sanctions and some countries’ refusal to pay in roubles. Record oil and gas revenues meanwhile, continue to swell Russia’s war chest.
“The Kremlin is of course counting on the possibility that we will lose interest because of our own mid-term elections in America, the UK looking for a new prime minister, Germany worried to death about gas, and the Rhine river being about six inches deep,” said retired U.S. general Ben Hodges, former commander of U.S. Army forces in Europe.

“War is a test of logistics and it’s a test of will. The test will be – do we in the West have superior will to the Kremlin? I think this is going to be the challenge.”
The first source close to the Russian authorities said Moscow in any future potential peace deal wanted to lock in territorial gains, secure the entire Donbas region, and for Kyiv to commit to military neutrality.

Ukrainian President Volodymyr Zelenskiy on Tuesday said Kyiv would not agree to any proposal to freeze the current frontlines in order to “calm” Moscow.

Podolyak, his advisor, said the West was supplying Kyiv with enough weapons to “not fall” but not enough to win, adding that much greater support was needed.

Western states have refused to commit ground troops to the conflict and have refrained from supplying some military hardware because they want to avoid a wider war with Russia, which has the largest stockpile of nuclear weapons in the world.

WAR OF ATTRITION
U.S. officials said they believed Putin was still committed to his original goal of seizing Kyiv, but couldn’t achieve that. The Russian Defence Ministry did not immediately respond to a request for comment on that assertion.
The same U.S. officials said they had seen no signs that the Russians intended to de-escalate and thought the war would be protracted.

Andrey Kortunov, head of RIAC, a foreign policy think tank close to the Russian foreign ministry, said neither side looked like blinking first.

“Both sides apparently believe that with time their positions might get stronger,” he said. “Realistically, it’s very hard to imagine that we can come to a political settlement anytime soon.”

The two armies have long been locked in a war of attrition, with neither so far able to make a decisive breakthrough.

Faced with what Western intelligence says are serious manpower shortages after heavy losses, Russian forces have made only modest and hard-fought advances in eastern Ukraine in the last month.

Konrad Muzyka, a Poland-based military analyst, said Russian forces had the initiative in a couple of areas of eastern Ukraine but it was hard to see one side gaining the upper hand without a major boost in equipment and manpower.

“Whoever can do that will win the war,” said Muzyka.

Ukraine’s battlefield performance between now and the winter could determine the direction of the war, said Neil Melvin, a London-based analyst at the RUSI think tank.

“Ukraine needs to convince Western supporters than it can win (in battle) and have momentum. If they can show, during this period, that they can push the Russians back and keep up that momentum, it will be a win.”

But the longer the war dragged on the greater the risks of Western divisions over Ukraine become as higher fuel, gas, electricity and food prices bite.

“All the economic indicators are turning negative now. It will be harder to motivate people shivering in their apartments (to accept hardships) if Ukraine is not seen to be winning,” said Melvin, who said pressure for a political settlement could then grow, splitting both the EU and the NATO military alliance.

NUCLEAR RISKS?
Tony Brenton, a former British ambassador to Russia, said the West “at some point” might have to “push the Ukrainians into some rather uncomfortable compromises” unless Kyiv achieved some sort of breakthrough.

And he warned that a nuclear-armed Russia could escalate the conflict if it faced humiliating defeat.

Russia has repeatedly dismissed the notion that it would need to use tactical nuclear weapons. Putin last month said that Moscow had barely got started in Ukraine and challenged the West to defeat it on the battlefield.

Samir Puri, author of Russia’s Road to War with Ukraine, said Kyiv risked being forced to live with de facto partition, with up to a quarter of its territory under Russian control, unless it could change the war’s dynamics.

“I think Russia can dig in for this for the long term and that partition is, sadly, the most probable outcome in the medium term,” said Puri.

Others are more optimistic.

“I believe that the Russian logistics system is exhausted and it’s not going to get any better any time soon,” said Hodges, the retired U.S. general.

“If the West, led by the U.S. and the UK, continue to deliver what we said we were going to deliver… I’m optimistic that Ukraine could conceivably push the Russians back to a 23 February line by the end of this year.”

Internet dating Without a Picture

Tips on how to Impress Your Latin Wife

The right way to Be Attractive Sugar Daddy

The Challenges and Opportunities of any International Marital life