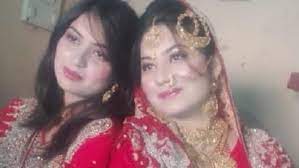 Arooj Abbas, 21, and Aneesa Abbas, 23, were allegedly killed for refusing to bring their husbands — cousins from forced marriages — to Spain. Arooj and Aneesa were murdered in Nathia village, about 170 kilometres from Lahore, on Friday because they failed to get their respective husband’s visas to settle with them in Spain, reported the Dawn newspaper.

Initial investigation suggested that both the sisters, who were married to their cousins in Pakistan more than a year ago, were not happy with their marriages, the report added.

Officer Ataur Rehman told news agency AP that murder charges were levelled against the women’s brother, a paternal uncle, both husbands, a cousin, and both fathers-in-law. Two unknown suspects and another relative also charged in the murder were still at large.

News agency PTI reported that the sisters were found dead in their house. The police had earlier said the women were killed by their paternal uncle, who was also the father-in-law of one of them.

Their husbands — Hasan and Atique – as well as their in-laws suspected they had “intentionally” delayed the procedure for their husbands’ visas as their wives did not want them to be with them in Spain.

In rural areas of Pakistan, forced marriages are common. AP reported that relatives don’t hesitate to kill women who refuse them or ignore the opinions of family elders. As many as 1,000 women are killed every year in so-called honour killings in Pakistan, according to human rights bodies.

In Gujrat, a few years ago, Sana Cheema, an Italian-Pakistani woman, 26, was allegedly killed by her father, brother, and uncle in the name of honour. Sana’s father wanted to marry her off to his relative but she had a boyfriend in Italy to whom she wished to marry, PTI reported.

US-led Indo-Pacific strategy is a ploy to create divisions: China