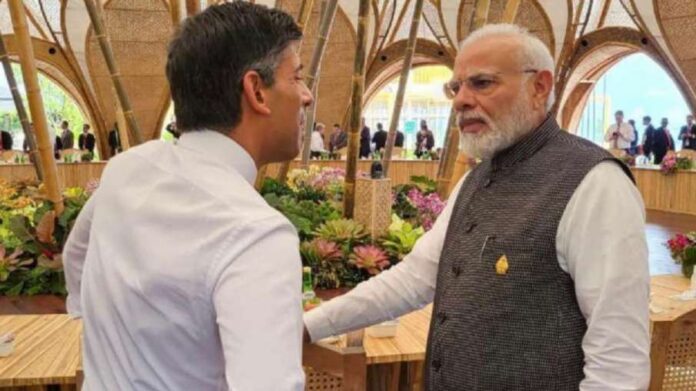 London: Industry and student groups in Britain have welcomed the new UK-India Young Professionals Scheme launched by Prime Minister Rishi Sunak, calling it a great step in ensuring the smooth movement of top talent between markets.

The scheme launched on Wednesday will be up and running from early next year to offer up to 3,000 visas annually to Indian students and professionals aged between 18 and 30 to live and work in the UK for 24 months, with British nationals granted a similar offer for India.

The Lord Mayor of London, who represents the financial hub of the City of London globally, welcomed the announcement from the G20 Summit in Bali and called for enhanced exchanges between the two countries in other areas too.

“International trade requires the removal of barriers and visa schemes like this are a great step in ensuring we allow top talent to move smoothly between markets,” said Lord Mayor Nicholas Lyons.

“India is home to the fastest growing economy in the world and one of the UK’s historic partners. With trade negotiations ongoing, firms will also want to see a greater focus on enabling smoother digital trade and the free flow of data. Delivering on these priorities will in turn unlock opportunities and growth for businesses across the UK,” he said.

The Federation of Indian Chambers of Commerce and Industry (FICCI) dubbed the new scheme an “opportunity of a lifetime” for young professionals from both countries and a sign of the strength of the UK-India Migration and Mobility Partnership (MMP) signed last year.

“This will give the brightest young minds from both the countries to live and work in the other country. This will be an opportunity of a lifetime for these young professionals. The announcement also highlights the strength of the UK-India Migration and Mobility Partnership agreed last year,” said FICCI Director General Arun Chawla.

The National Indian Students and Alumni Union (NISAU) UK, which campaigns for streamlined provisions for Indian students studying in the UK, said the new scheme marked an “important moment” in the UK-India relationship to address critical skill shortages as it awaits the operational details to see it come to life next year.

“I hope that the scheme does not prioritise only one talent area over another though and the 3,000 spaces should be diversified across STEM, humanities etc,” said NISAU UK Chair Sanam Arora.

“I have no doubts that the scheme will be oversubscribed from India’s perspective, but I do hope that as many young Brits as possible are also encouraged to take up this scheme to go to India because this has the potential to be a truly wonderful way of educating Britain’s youth about contemporary India,” she said.

“This scheme will further help strengthen the living bridge of young Indian and British talent enriching the other country, just as our Indian students who we are honouring through the India UK Achievers Honours, have done for centuries,” she added.

The scheme will be open to degree-educated young professionals aged under 30, with a detailed application criteria expected to be laid out in the coming weeks. The UK Home Office guidance states that further updates would be added once the first Indian ballot is announced.

Just how Safe Can be Online Dating?