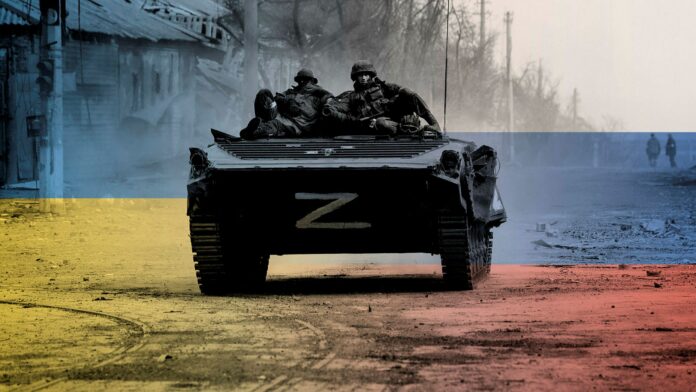 Pokrovsk : Russia pressed its offensive in Ukraine’s eastern Donbas region on Sunday as Ukrainian President Volodymyr Zelenskyy said the outcome of the gruelling conflict would determine whether his country’s fate lies with the West or under Moscow’s domination.

After declaring its full control of a sprawling seaside steel plant that was the last defence holdout in the port city of Mariupol, the Russian military launched artillery and missile attacks in Ukraine’s industrial heartland, seeking to expand the territory Moscow-backed separatists have held since 2014.

In a Saturday night video address to the nation, Ukrainian President Volodymyr Zelenskyy described the situation in the Donbas as really hard but “the fact that we are able to say this on the 87th day of a full-scale war against Russia is good news.

Every day that our defenders take away from these offensive plans of Russia, disrupting them, is a concrete contribution to the approach of the main day. The desired day that we are all looking forward to and fighting for: Victory Day, Zelenskyy said.

Zelenskyy’s remarks came as Poland’s president prepared to meet with him to support Ukraine’s goal of becoming a candidate for European Union membership, a issue set to be decided at an EU summit in late June.

As the West rallies behind Ukraine, Polish President Andrzej Duda made an unannounced visit to Kyiv and on Sunday became the first foreign leader to address the Ukrainian parliament since the start of the war.

Poland, which has welcomed millions of Ukrainian refugees since Russia invaded its neighbour, has become a major gateway for Western humanitarian aid and weapons going into Ukraine. The government in Warsaw also is a strong supporter of Ukraine’s desire to join the European Union.

Zelenskyy stressed on Saturday that the EU should consider Ukraine’s desire to join the 27-nation bloc as soon as possible within the context of Russia’s invasion.

I want to emphasise that our European integration path is not just about politics, Zelenskyy said. It’s about quality of life. And about the fact that Ukrainians perceive the values of life in the same way as the vast majority of Europeans.

Russia appeared to have made slow grinding moves forward in the Donbas in recent days. It intensified efforts to capture Sievierodonetsk, the main city under Ukrainian control in Luhansk province, which together with Donetsk province makes up the Donbas.

Lujansk Gov. Serhii Haidai said the only functioning hospital in the city has just three doctors and enough supplies for 10 days.

On Sunday, the British Ministry of Defence said Russia’s only operational company of BMP-T Terminator tank support vehicles, which are designed to protect main battle tanks, has likely been deployed to the Sievierodonetsk axis of the Donbas offensive .

It said, however, with a maximum of 10 of the vehicles deployed, they are unlikely to have a significant impact on the campaign .

In a general staff morning report, Russia also said that it was preparing to resume its offensive toward Slovyansk, a city in Donetsk province that is critical to Russia’s objective of capturing all of eastern Ukraine and saw fierce fighting last month after Moscow’s troops backed off from Kyiv.

A monastery in the village of Bohorodichne was evacuated after being hit by a Russian airstrike, the regional police said Saturday. About 100 monks, nuns and children had been seeking safe shelter in the basement of the church and no one was hurt, the police said in a Facebook post.

Zelenskyy on Saturday emphasized that the Donbas remains part of Ukraine and his forces were fighting to liberate it.

With Russia claiming to have taken prisoner nearly 2,500 Ukrainian fighters from the besieged Mariupol steel plant, concerns grew about their fate and the future facing remaining residents of the city, now in ruins with more than 20,000 residents feared dead.

The Russian Defence Ministry released video of Ukrainian soldiers being detained after announcing that its forces had removed the last holdouts from the Mariupol plant’s extensive underground tunnels. It said a total of 2,439 had surrendered.

Family members of the fighters, who came from a variety of military and law enforcement units, have pleaded for them to be given rights as prisoners of war and eventually returned to Ukraine.

Deputy Prime Minister Iryna Vereshchuk said on Saturday that Ukraine will fight for the return” of every one of them.

The Russian Defence Ministry on Saturday released video of its troops taking into custody Serhiy Volynskyy, the commander of the Ukrainian Navy’s 36th Special Marine Brigade, which was one of the main forces defending the steel plant.

The Associated Press has not been able to independently verify the date, location and conditions of the video.

The Azovstal steel plant for weeks was the last defense holdout in Mariupol and became a symbol of Ukrainian tenacity. Its seizure gave Russian President Vladimir Putin a badly wanted victory in the war he began nearly three months ago.

Denis Pushilin, the pro-Kremlin head of the self-proclaimed Donetsk People’s Republic, vowed the Ukrainian fighters from the plant would face tribunals. He said the fighters included some foreign nationals, though he did not provide details.

A prominent member of Russia’s parliament, Leonid Slutsky, said Moscow was studying the possibility of exchanging the Azovstal fighters for Viktor Medvedchuk, a wealthy Ukrainian with close ties to Putin who faces criminal charges in Ukraine, the Russian news agency Interfax reported.

Slutsky later walked back those remarks, saying he agreed with Pushilin that their fate should be decided by a tribunal.

The Ukrainian government has not commented on Russia’s claim of capturing Azovstal.

Ukraine’s military had told the fighters their mission was complete and they could come out. It described their extraction as an evacuation, not a mass surrender.

Mariupol, which is part of the Donbas, was blockaded early in the war and became a frightening example to people elsewhere in the country of the hunger, terror and death they might face if the Russians surrounded their communities.

The mayor of Mariupol warned Saturday the city is facing a health and sanitation catastrophe from mass burials in shallow pits across the ruined city as well as the breakdown of sewage systems.

Mayor Vadim Boychenko said summer rains threaten to contaminate water sources as he pressed Russian forces to allow residents to leave the city. An estimated 100,000 of the 450,000 people who resided in Mariupol before the war remain.

In addition to the humanitarian catastrophe created by the (Russian) occupiers and collaborators, the city is on the verge of an outbreak of infectious diseases, he said on the messaging app Telegram.

With Russia controlling the city, Ukrainian authorities are likely to face delays in documenting evidence of alleged Russian atrocities in Mariupol, including the bombings of a maternity hospital and a theatre where hundreds of civilians had taken cover.

Satellite images in April showed what appeared to be mass graves just outside Mariupol, where local officials accused Russia of concealing the slaughter by burying up to 9,000 civilians. (AP)

US surpasses China as India’s biggest trading partner in FY22 at $119.42 bn

Kashmir conflict is elephant in the room: Khar on South Asia...