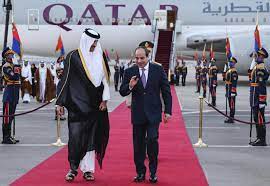 Cairo: Qatar’s emir arrived in Cairo late Friday for talks with Egypt’s president, his first visit to the country following years of frayed ties and a boycott of Doha by four Arab states, including Egypt.

With Qatari and Egyptian flags flowing over the tarmac, Sheikh Tamim bin Hamad Al Thani was greeted at the airport by President Abdel Fattah el-Sissi, a courtesy only granted to leaders of heavyweight allies.

The two were expected to discuss on Saturday key regional issues ahead of President Joe Biden’s anticipated trip to the Middle East next month and to deliberate on ways to further improve bilateral diplomatic and economic relations, local media reported.

The emir’s visit came less than two months after his government announced that it would invest USD 5 billion in Egypt, another lifeline to the country’s economy which has been dealt a blow following the Russian invasion of Ukraine.

Egyptian-Qatari relations deteriorated in 2013, when Egypt’s military removed from power the Islamist President Mohamed Morsi, who was backed by Qatar, and cracked down on his Muslim Brotherhood.

In 2017, Egypt joined Saudi Arabia, the United Arab Emirates and Bahrain in a boycott of Qatar in an effort to force Doha to change its policies.

With a wide-ranging trade embargo, a ban on Qatar-bound flights from their airspace and a media blitz, they called on Doha to end close relations with Turkey, Iran and Islamists across the region.

Qatar rejected the quartet’s demands, which included that it shutter its Al Jazeera news network, expel a small contingency of Turkish troops from its territory and cut ties with the Muslim Brotherhood. It also denied claims by the quartet that it supports extremists.

The boycott pushed the gas-rich nation in closer alliance with Turkey and Iran while Doha also continued to strengthen ties with Washington.

The rift finally ended in 2021, when Qatar signed a declaration with the four to normalize relations. Since then, ties have improved and top officials have exchanged visits.

El-Sissi also met with the emir in November, on the sidelines of the climate change summit in Glasgow, and most recently in February, when they both attended the opening of the Winter Olympics in Beijing. Photographs of the two from the events warmly shaking hands came as early signs of renewed rapport.

China claims it is still India’s top trade partner as per its data, not...